Meetings are taking place across Canada, with more being planned, to make sure businesses and leading employers are ready for the country’s new Express Entry immigration programme which launches in the New Year.

Starting in January 2015, Canadian employers will be able to consider Express Entry candidates for jobs where there are no Canadians or permanent residents available for the positions.

Citizenship and Immigration Minister Chris Alexander wants employers to be ready for the new programme and has been meeting on a regular basis with stakeholders and business leaders. More meetings will follow in the coming months.

Express Entry candidates are those who complete an online profile indicating their interest in immigrating to Canada and who meet the criteria of at least one of the three federal immigration programmes.

Candidates are ranked against others within the Express Entry pool based on criteria that lead to economic success once in Canada. Citizenship and Immigration Canada will only invite the highest ranked candidates, including those with valid job offers or provincial or territorial nominations, to apply for permanent residence.

Alexander explained that jobs offered to Express Entry candidates will be subject to the Labour Market Impact Assessment in place at that time. 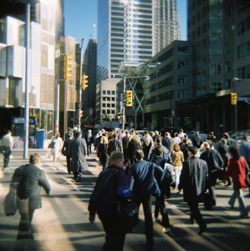 Meanwhile, Canada has welcomed the country’s one hundred and fifty thousandth new citizen of 2014, more than double the number of new Canadians sworn in over the same period last year.

The 150,000 new citizens who came to Canada from more than 200 countries were welcomed at approximately 1,500 citizenship ceremonies across the country.

Alexander said that the large number of new citizens who have joined the Canadian family so far this year shows that changes and improvements that have come into effect over the past year have already made the system more efficient.

He also pointed out that the backlog has been reduced, thereby helping more people realize their dream of becoming Canadian sooner.

Recent changes to the Citizenship Act will further reduce wait times by streamlining the decision making process for citizenship. It is expected that those changes will bring the average processing time for citizenship applications down to less than one year and that the current backlog will be reduced by more than 80% by 2015/2016.

Since 2006, Canada has welcomed over 1.3 million new Canadians. Canada has also enjoyed the highest sustained levels of immigration in Canadian history, an average of a quarter million newcomers each year.

Million Tafesse has not set their biography yet